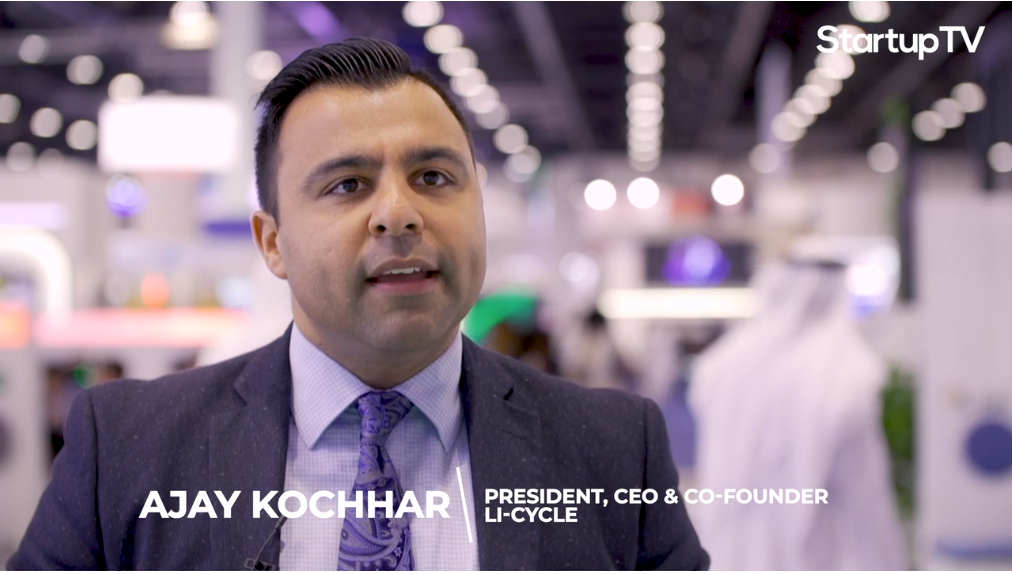 Electric vehicles have been a major tool for reducing carbon footprints within the transportation sector. From electric bicycles to the 2018 summer of electric scooters, Tesla’s Cybertruck, to Einride’s electrified self-driving freight vehicle, the electrification trend means most of our future mobility relies on power from lithium-ion batteries. This week we look at two companies, Li-Cycle and Aceleron, who are setting new precedents about how the battery industry should look.

We had the opportunity to interview Ajay Kochhar at the World Energy Congress in Abu Dhabi. He shared with us his perspectives about the mobility sector. “Everything’s getting electrified these days. Lithium-ion batteries are in everything again from any electrified vehicle, bus, truck all the way down to passenger vehicle and of course around us in everyday life, even the camera I’m sure is being powered from lithium-ion battery,” said Kochhar.

What’s So Important About Batteries?

The mass demand for lithium-ion batteries was marked notably by the three-fold increase in the global price of lithium between 2016 and 2018. Adoption was rapid. People were eager to demonstrate their support for a cleaner future, which was one with very few fossil fuels involved. And they were right to do so — electric cars present a massive improvement of emissions when compared with traditional combustion engines. The tricky part is when we consider what happens to the car and its parts when it’s done being used?

“So again these things will die at some point and need to be recycled and traditionally up until now this has been a high-temperature process and typically only 50% of materials are recovered, of the materials within, so on a go-forward basis, that’s very inefficient,” said Kochhar.

Lithium-ion batteries, the current industry standard for battery packs, contain precious metals such as lithium, nickel, cobalt. When it comes time to replace the battery, often the battery is no longer usable, but the precious metals within can be mined and reused. The recycling rate is about 50% worldwide, and the process of recovering the materials is often incredibly energy-intensive. We are going to look at two startups tackling different parts of the lithium-ion battery lifecycle.

One researcher, Linda L Gaines from Argonne National Lab posited that the reason battery recycling is still relatively inefficient is that companies have mostly until now focused on increasing the life of the battery, due to Western perspective about waste.

One company from Birmingham called Aceleron has made news with its intelligent design that means their batteries can be easily serviced and dismantled for reuse. The idea came when the founders Amrit and Carlton realized that most batteries were not designed with maintenance in mind — so they designed the battery for the circular economy.

Another company called Li-Cycle from Mississauga, Canada has developed a two-step recovery process for lithium and other precious metals. They claim it can recover 80-100% of precious metals from the used batteries, compared with the average success rate of about 50%. This massive improvement on battery efficiency means that batteries can be easily reused. And its steady work — the company states they already have more batteries than they have the capacity to recycle. A problem the founder calls a good one.

Kochhar explained to us how the Li-Cycle system works.

“We do that via 2 technologies, one is a mechanical technology, we take batteries we break them down into inert material, and then the second technology is where we take the inert material and we re-recover the chemicals again, lithium, cobalt, nickel, etc. those two are actually two separate technologies… a hub and spoke model like a wheel. So the spoke is the satellite places where we break down the battery, make an inert material. The hub is where we consolidate that, convert it all into chemicals.”

At the beginning of January 2020, the company announced its first shipment of metals recovered via its trademarked process.

While the rapid adoption of electrification of vehicles marks an important turning point in the race to improve sustainability, we’ve got a long way to go. There are other aspects of the lithium-ion battery production cycle to consider – including the energy-intensive mining process. Further, the demand for these batteries is only expected to increase, meaning more waste on the horizon. But with the expansion of innovations like the ones from Li-Cycle and Aceleron, we can mitigate some or even all of the lithium-ion battery waste, a number one consulting form quoted at 1.2 million metric tons for the year 2030.

March 30, 2020, Stefan Hogg Renewable Energy: The Carbon-free Future The past decade has seen rapid improvements in the field of renewable energy generation from carbon-free sources. Solar energy has...

Dear Followers and Subscribers, In light of the global COVID-19 pandemic, Li-Cycle would like to provide an update on the company’s current activities.   As always, the health and safety of...