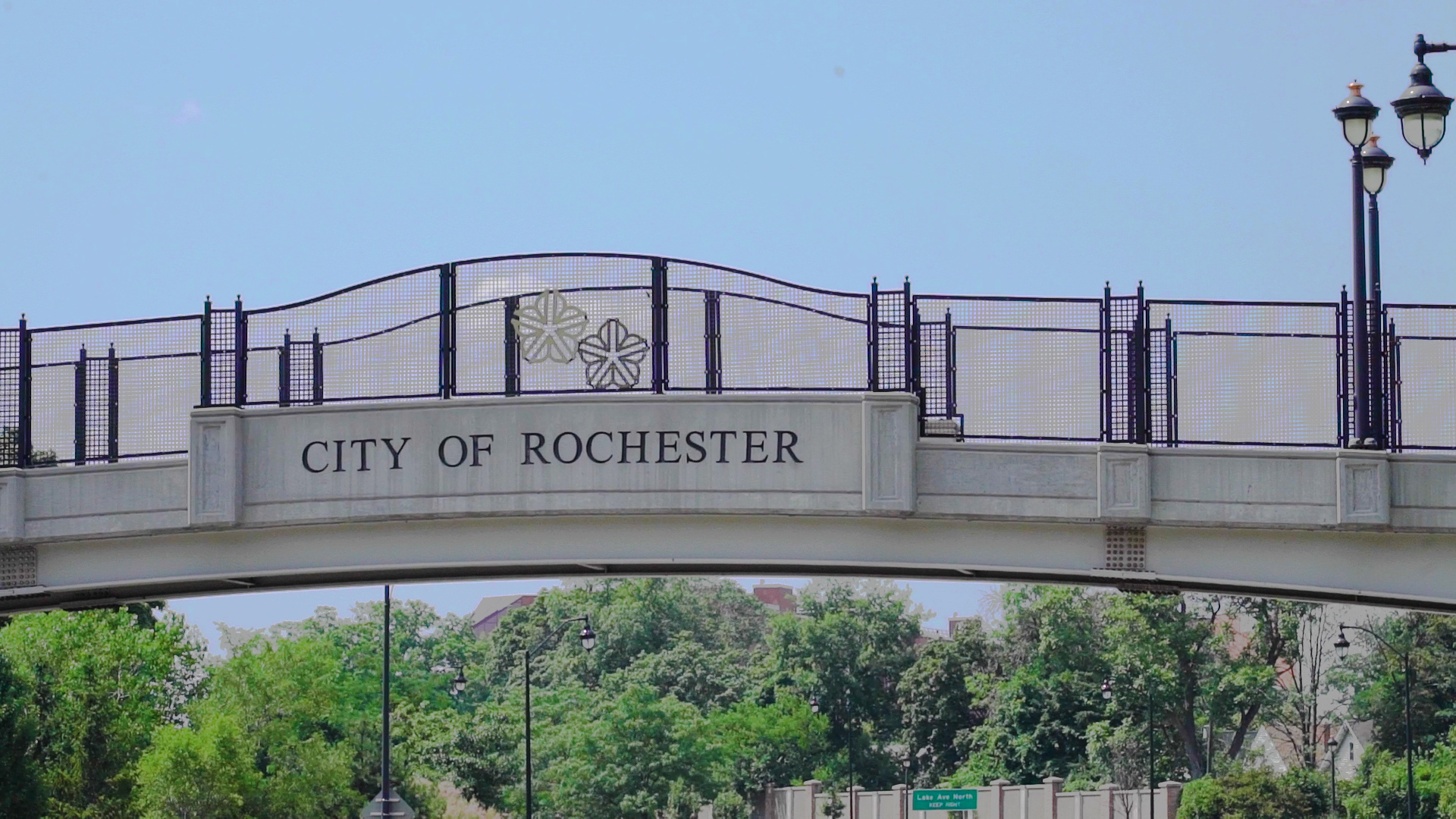 Innovation and technology has been part of Rochester’s core for more than a century, and the path paved by the likes of Eastman Kodak and Xerox is still being traveled by dozens of high-tech firms advancing health care, bat­tery technology, manufacturing and other fields.

Technology is forever moving forward, but the COVID-19 pandemic accelerated the digital transforma­tion and the adoption of a various technologies, and that trend is expected to continue. From the earliest days of the pandemic, Rochester companies sought innovative ways to fight the virus on several fronts, and other firms adapted to coronavirus-related restrictions to continue pushing the boundaries on cutting edge technologies.

Rochester-based projects improved face shields and respirators and created useful imaging databases in direct response to the COVID-19 pandemic. Pioneering work directly aimed at the coronavirus is ongoing, in addition to the development of other technologies and manufac­turing processes that could lead the way in the future. Ke Du, an assistant professor and researcher at Rochester Institute of Technology, is assisting in the development of a better coronavirus test. Du and several RIT students are working with Integrated Nano Technologies (INT), a Henrietta-based firm that provides diagnostic testing, on a COVID-19 test that would provide the accuracy of traditional polymerase chain reaction (PCR) testing with near rapid speed. “We are trying to integrate this CRISPR sensing with the PCR technology from Integrated Nano Technologies,” Du said, adding RIT students are playing a critical role in the project, working with INT to improve the platform, testing samples and further developing the process.

PCR, though considered the gold standard of testing, is “very sensitive,” Du said, and needs to be heated and cooled in a thermocycle with strict controls, which can cre­ate a bulky system. Using CRISPR, the temperature could remain at a constant 37 degrees throughout and reduce the need for heating and cooling.

Developed with COVID-19 in mind, the technology could lend itself to testing other viruses in the future, Du said, and researchers are currently working at testing dif­ferent variants and mutations of coronavirus. The tech­nology, which is being developed in partnership with INT, could be used for various forms of PCR testing, which can be used in organ transplants, drug screening, genetic analysis and a wide variety of infectious disease and oth­er medical diagnostic testing.

The technology is promising in large part due to its po­tential to be significantly less expensive than traditional diagnostic tools, but Du said it could also be much faster and not require samples to be sent to a centralized lab. Du said the final testing unit could be comparable in size to an iPad or tablet.

Du said INT has already developed an excellent plat­form for the testing, which includes sample preparation, system integration and reading. As early as next month, Du and the students aiding in the development are plan­ning to test the INT platform with the assay samples de­veloped at RIT.

The team has already applied for funding through a state manufacturing grant program to further develop the platform for broader use.

“We have a very mature, established process of doing the CRISPR,” Du said. “The other thing is just putting that assay into the system, and hopefully it’s ready to go, and then making the whole system more affordable, simpler, faster, smaller and things like that.”

Across town at the Eastman Business Park, battery recycling firm Li-Cycle opened a Rochester facility in late 2020. The Canadian-based lithium-ion recycling startup uses proprietary technology to sustainably recover the rare metals needed to produce lithium-ion batteries, which power everything from power tools to cell phones and electric vehicles. Tim Johnston, co-founder and executive chairman at Li-Cycle, spent a decade working on bat­tery technology and said it became clear there was not a good recycling solution for the materials, which are initially acquired through mining and refining. Traditional lithi­um-ion recycling involves high temperature incineration and smelting and generates unwanted waste, something Johnston referred to as “frustrating.”

“We felt that we had the right background to address and solve the problem and felt there was a clear market gap that could be addressed,” Johnston said of himself and co-founder Ajay Kochhar, who serves as president and CEO of Li-Cycle. “The key difference of what we’ve done with the Li-Cycle technology is gone away from the historical high-temperature processing.”

The high-temperature processing is energy intensive and creates unwanted emissions, Johnston said, while the Li-Cycle technology does not generate the air emissions and recovers more material from the batteries.

Li-Cycle uses a spoke and hub model, in which smaller spokes receive batteries and recycled materials to pro­duce intermediate materials. Those materials are then processed at a larger, centralized hub facility, one of which is planned to be located in Rochester, where the end materials are produced for reuse in future batteries.

The $175 million facility planned for the Rochester hub is expected to provide roughly 120 full-time jobs and hun­dreds of temporary construction jobs. Johnston said the hub would make Li-Cycle North America’s largest produc­er of cobalt and a top producer of nickel and lithium.

Li-Cycle searched across North America for potential hub locations, Johnston said, but Rochester stood out due to its existing infrastructure, ability to attract and attain a talented labor force and significant state incentives.

Throughout the past year, COVID-19 has been a con­stant obstacle for Li-Cycle as the company worked to scale its operations and build two facilities. Johnston said the most significant challenge was moving into new ju­risdictions and hiring new employees amid the pandem­ic, but the Li-Cycle was able to navigate the logistical challenges and continue moving forward. Johnston said the company would probably come out of the pandemic a stronger, more productive organization.

Li-Cycle is seeking to expand rapidly and plans to build more than a dozen more spoke facilities in North Ameri­ca, Europe and Asia, in addition to several hub facilities in Asia over the next few years, Johnston said.

As companies anticipate coming out of the pandemic, many are seeking to improve manufacturing processes and RIT and various other local organizations are stand­ing ready to help.

Michael Thurston, a faculty researcher at RIT who di­rects the state Center of Excellence in Advanced and Sustainable Manufacturing, said the organization is doing a lot of work with startups, particularly in the clean energy space, and assisting in technology, manufacturing readi­ness and other developments.

Thurston said the center worked on several corona­virus-related projects throughout the last year, including exploring emergency alternatives for ventilators, sourcing materials that had dried up through normal supply chan­nels and validating alternative mask options. As the pan­demic continued, demand for assistance slowed, but as vaccines increase and cases slow throughout much of the state that demand has picked back up.

“We have seen some more interest recently,” Thurston said of the organization’s assistance in developing Indus­try 4.0 programs, which are premised on the idea there is a fourth industrial revolution centered on digitalization and the integration of intelligence and data within manufactur­ing. “The outcome of implementing some of these technol­ogies is they can make you a little more nimble and easy to adapt to changing situations.”

Thurston said the center is helping companies look at their broader operations, target the technological adop­tions that could most impact their business and develop multi-year plans to adopt new technology. He said adopt­ing advanced manufacturing technologies would have helped companies better adapt to the changing situations of the COVID-19 pandemic.

The Center of Excellence in Advanced and Sustainable Manufacturing is assisting manufacturers in the adoption of various technologies, Thurston said, including inte­grating robots called cobots into their existing operations. Cobots, or collaborative robots, are used to work in direct proximity to humans to optimize production.

Another development spurred by the COVID-19 pan­demic that Thurston pointed out is a movement toward onshoring production of products and precursors, an issue that the COVID-19 pandemic exposed in the U.S. Many raw materials are produced in China and other countries on the other side of the globe, and supply chain issues became evident during the pandemic and continue to be an issue across industries.

Movements toward onshoring production could be ben­eficial overall and “may have create a little bit of a manu­facturing renaissance,” Thurston said.

Original interview published in BNN Bloomberg April 20, 2021  As the first generation of electric vehicles nears retirement, more voices in the industry are highlighting the importance of recycling components...

Company recognized by Solar Impulse Foundation for its positive impact on the environment in a financially profitable way Original article published in Businesswire TORONTO–(BUSINESS WIRE)–Li-Cycle Corp. (“Li-Cycle” or “the Company”), an...