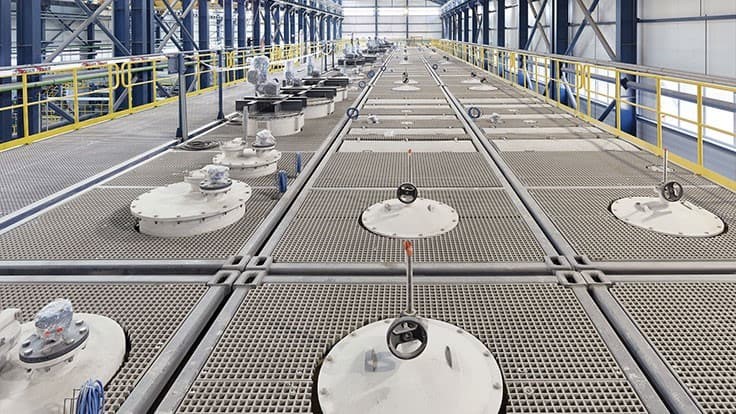 The manganese, cobalt and nickel solvent extraction technology will be used at Li-Cycle’s battery recycling plant in Rochester, New York.

Metso Outotec, headquartered in Helsinki, says it has signed an agreement with Li-Cycle North America Hub Inc. for the supply of manganese, cobalt and nickel solvent extraction technology to be used at its battery recycling plant that is being constructed in Rochester, New York. The contract value was not disclosed.

Jari Ålgars, president of the Metals business area at Metso Outotec, says, “The energy-efficient, modular VSFX solvent extraction plant, which is part of our Planet Positive product range, reduces emissions and is safe to operate. The Li-Cycle project will be an important new reference for Metso Outotec in the battery recycling business.”

Li-Cycle, which is headquartered in Toronto, has developed a hub-and-spoke model for lithium-ion battery recycling. Ajay Kochhar, the company’s co-founder, president and CEO, has said that Li-Cycle’s hub-and-spoke model solves the logistics problem associated with lithium-ion batteries by decentralizing the mechanical processing of the batteries near generators, namely battery manufacturers and areas with high concentrations of EV use. The company also is working with aggregators of end-of-life electronics. Its spokes produce black mass—a mixture of lithium, manganese, cobalt and nickel—as well as a mixed aluminum and copper product and plastics. This material is then further processed at hub locations, with the first commercial-scale facility in Rochester.

Li-Cycle recently announced it will expand the input processing capacity of its Rochester hub by more than 40 percent to 35,000 metric tons of black mass annually, which is equivalent to nearly 90,000 metric tons of lithium-ion batteries. Li-Cycle also says the increased capacity will allow the facility to process battery material that is the equivalent of about 225,000 electric vehicles (EVs) per year.