EVs Are the Future, but Are They Really All That Eco-Friendly? 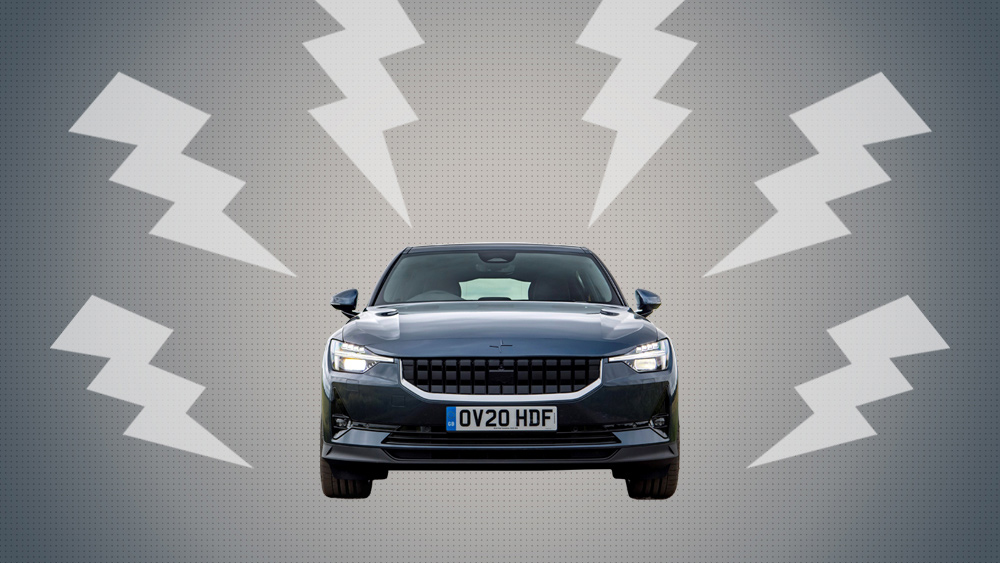 It’s not easy being green, but the EV industry is addressing sustainability issues to further clean up processes.

It’s official: The singular reign of the gas engine has ended, usurped by the electric vehicle (EV). Hundreds of new EVs are coming to market in the next four years courtesy of more than 15 carmakers. And even the likes of Bentley and Rolls-Royce have made grand pronouncements of full electrification of their fleets by 2030.

Just how surprising is this turn of events? Imagine telling yourself a decade ago that GM would bring back the Hummer . . . as an EV. Or that every new hypercar worthy of its specs will be at least partly electrified.

Naysayers, though, may also point to a vehicle like the Hummer and ask: Just how green can a 9,000-pound SUV be? Its batteries demand hard-to-source materials such as lithium and cobalt. And electricity comes with an environmental price if it is derived from a coal plant.

To get at that answer, we did a deep dive into the many issues that will eventually answer the question of whether EVs will be as green as we hope. Will they be an environmental panacea, or is this just an elaborate game of bait and switch?

Mining the Raw Materials for Batteries

The major difference between an EV and an internal combustion engine (ICE) is, of course, the battery. So let’s start there. Most of the parts in a gasoline power train are easy to source. The opposite is true for lithium-ion battery packs, the common energy source for current EVs. Batteries are comprised of materials such as cobalt, lithium, nickel, manganese and iron, which must be mined. Of those, lithium and cobalt are relatively rare.

Cobalt is primarily mined in the Democratic Republic of the Congo, followed by China and Australia. The Congo regularly sees serious environmental, human and political-rights issues. Processing lithium from brine, meanwhile, can use some 1,900 tons of water to make one ton of lithium, at least according to the science and technology journal Nature. And it’s often sourced from arid locales in Chile and Bolivia, seriously impacting water tables.

“No reasonable EV advocate would pretend that there aren’t environmental issues—or even human-rights issues,” says Chelsea Sexton, an EV industry expert who has been working in the space for decades. “But let’s not pretend the sourcing of petroleum is without issues either,” she adds. “We must be working better on all sides, but we can’t let the fact that it’s not perfect stop us from moving forward.” Sexton is now assisting with President Biden’s loan and tax credit DOE program to help the US auto industry continue to invest in EVs and infrastructure.

As volumes increase, so does the environmental oversight by the industry in general, according to Eric Bach, chief engineer and senior vice president of product for Lucid Motors. “In the beginning of electrification, there was less emphasis on making sure the supply chain for batteries met ethical standards or about the CO2 and pollution that comes with production,” he says. “As the volumes have gone up, and will continue to go up, the industry of battery manufacturers has acknowledged that it must take dramatic measures to make sure it is a clean industry.”

To carmakers like Lucid—a new OEM that will only produce EVs—the life-to-death cycle of batteries is of great importance, and Lucid’s singular focus allows the company to exert influence on the industry. Bach also notes that LG and Samsung have both taken initiatives to ensure that battery manufacturing becomes carbon neutral, as the industry realizes that it’s in its own best interests to do better. “It’s a big topic on the boards and a focus of the industry to get cleaner and cleaner every single year.”

Materials such as cobalt are also incredibly expensive—some $45,000 a ton—and engineers are continuously tweaking battery chemistry to minimize, or even eliminate, certain elements. One possibility is a new, solid-state battery that replaces many of the rarer materials with nontoxic and easily replaceable solid material such as advanced ceramics. BMW has spoken extensively of using the technology. Volkswagen and Tesla, meanwhile, are looking at replacing rare cobalt with manganese in their batteries. New-age battery technology will be iterative, but just as gasoline engines have continuously evolved, so too will battery tech.

Analysis: Mining in remote countries around the world has led to serious issues, but as more visibility is oncoming with major involvement by OEMs, expect the standards to get better, and that, hopefully, we’ll see less need of scarce materials as battery chemistry continues to evolve.

When it comes to actual efficiency, the Environmental Protection Agency (EPA) states, “EVs convert over 77 percent of the electrical energy from the grid to power at the wheels. Conventional gasoline vehicles only convert about 12-30 percent of the energy stored in gasoline to power at the wheels.” EVs are clearly a more efficient use of stored energy.

“The counterargument to EVs is that if you power an electric car on a coal plant, you’re not doing the world a lot of good,” acknowledges Lucid’s Bach. “The method of power generation is a big factor and a matter of continued discussion.”

However, the striking reality is that America’s energy grid is getting cleaner every year, using less coal than ever before. The Union of Concerned Scientists, a national nonprofit that originated at the Massachusetts Institute of Technology, found that emissions rates from US power plants fell more than 5 percent between 2016 and 2018 as a result of natural gas, wind farms and solar. It states that electricity derived from coal plants has dropped from 45 percent to 28 percent in the past 10 years.

The organization offers a chart on its site that shows the relative efficiency of driving an EV versus a regular gasoline vehicle by region of the US, comparing factors such as oil extraction, fuel-pipe emissions and emissions from coal plants powering EVs. Looking at the map, some parts of the country, those that use less coal, are clearly more beneficial than others.

For instance, in California, you’d need to drive an ICE that achieves 122 miles per gallon to be as efficient as an EV. However, within one of the dirtiest grids, located in the upper Midwest, you’d only need a gas vehicle with 39 mpg to equal an EV. Nonetheless, the average gas car sees only 31 mpg today, and a truck only 21 mpg.

“The dirtiest day of an EV’s life cycle is the day you drive it home,” says Sexton, referencing how the grid gets greener all the time. (For an even deeper dive into analytics, the truly curious can go to Argonne National Laboratory’s GREET system, an analytical tool that simulates emissions from countless scenarios. Playing around with the platforms shows that EVs trump gas cars environmentally in pretty much all cases.)

“Every time the grid gets cleaner, so does the electric car,” says John Voelcker, the former editor-in-chief of Green Car Reports and a highly regarded industry analyst. “In places like the West Coast, you will see well over 100 miles per gallon equivalency. No gasoline-burning car that will ever be built will be as low emission and low carbon as an EV charged on one of those grids.”

Analysis: EVs are clearly cleaner, even when charged via coal-powered plants.

What Happens to the Batteries Later?

Some day in the future, we will be facing another issue: an influx of used lithium-ion batteries. Marques such as Lucid are already mulling over what happens to those batteries, and the current consensus is that they will take two approaches.

The first solution will be to simply use the batteries for energy storage—a second life. The other is to recycle them. Both have obvious upsides. The question may be more of economics and sound business. The second-life approach has obvious appeal. A used battery pack is estimated to retain some 70 percent of its charging capacity. These batteries could be resold to be used in home storage or to maintain a micro-grid system—ever more important in places like California, where wildfires have forced large-scale electrical shutdowns.

The question, says experts like Sexton, is whether it will be cost effective to sell used batteries as prices for new batteries continue to fall. A homeowner may be less inclined to buy a used battery without being assured of its efficacy.

“Second-life batteries aren’t a technical question but an economic question,” she says. “I love the idea, but whether the economics make sense remains to be seen as battery costs have dropped 90 percent in the last decade. It may be cheaper to buy new lithium than recycle an old Leaf, or something like that.”

The second option is a burgeoning new business: recycling battery packs. As of now, it’s limited in scope, as most EVs are still on the road. Voelcker says that the battery packs on initial EVs like the Leaf have lasted longer than expected.

“Clearly, the degree to which dead batteries can be separated out and reused will lessen the amount we have to mine for new materials,” mentions Voelcker. The success of the endeavor may also turn on economics. “Will batteries made out of recycled materials be cheaper than batteries made out of virgin materials?” he asks. Voelcker notes that with volumes of used EV batteries still so low, there is no definitive answer.

Yet, as Ajay Kochhar, president and CEO at Li-Cycle points out, materials like cobalt, nickel and aluminum can be reused repeatedly. Li-Cycle, founded in 2016, is one of the first battery-specific recycling firms, with refining plants based in Canada and the US.

“To our dismay, we were finding that batteries were being handled like waste, and materials like lithium were being lost,” says Kochhar, who adds that the company’s refining process is carbon-neutral, and a vast majority of the materials can be recycled and reused. Kochhar also acknowledges that volumes are still relatively low, and it will be a long-term process.

“Even when it comes to cost, this is a virtuous cycle,” Kochhar says. “The battery is the most expensive part of the vehicle, and within the battery, the raw materials are typically 65 percent of cost. Battery prices have fallen in magnitude as we experience economies of scale. But at some point, you’re going to reach a limit, and that limit is materials.” In May, the company signed a deal with Ultium Cells, a collaboration between GM and LG Energy Solutions, too, as its official announcement stated, “recover the raw materials contained in the scrap.”

Final analysis (for now): EVs are clearly more efficient. But questions of mining and eventual recycling or secondary use are up in the air. Yet, as Voelcker says: “Yes, mining has environmental concerns we need to be aware of. But in a carbon analysis, mile for mile, EVs always win, even if they are recharged entirely on coal.”

October 26, 2021 Original video published in CNBC Catalyst   As the world transitions to renewables, could energy storage emerge as a key player in helping achieve a lower-carbon future?...