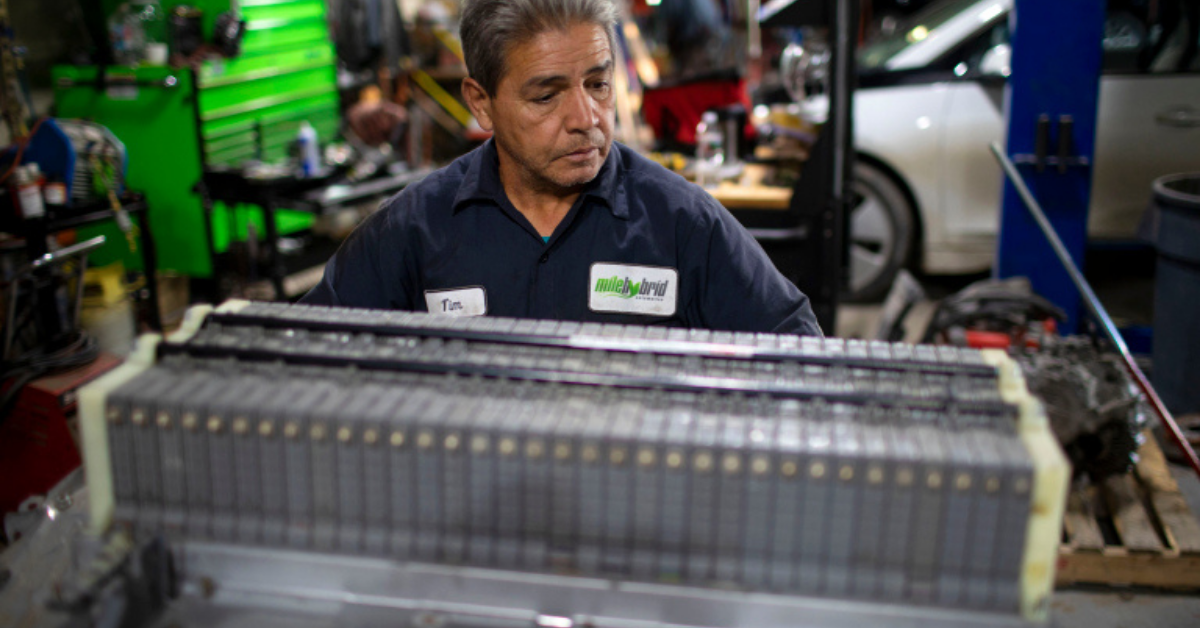 Original article published in the The Colorado Sun

Hybrid and electric vehicle batteries show up at MileHybrid Automotive because it’s one of the only places state officials can identify that accepts them for refurbishing. Or, if they’ve been folded like an accordion in an accident or spent their prodigious recharging powers entirely, for outright recycling.

Right now there are only a few thousand EVs humming along Colorado roads, and retired batteries trickle in at a low buzz. But if state officials get their way and help push 940,000 EVs onto highways by 2030, someone will eventually have to clean up the old-school mess left behind by the cars of tomorrow.

For now, it’s Sumpter, a couple of harried employees furiously taking apart battery stacks amid shelves crammed like Wall-E’s shed, and a Colorado State University report urging the state to get Sumpter some help. Soon.

“At the moment, the state is not well situated to deal with an influx of lithium ion batteries,” said Matthew Groves, vice president of legal, regulatory and compliance issues for the Colorado Automobile Dealers Association. Groves co-chairs a battery-recycling subcommittee of the Colorado Energy Office’s EV Committee.

“Disposal of EV batteries will become an urgent issue as the United States achieves large EV market penetration,” according to a late-2020 study by University of Colorado’s Renewable and Sustainable Energy Institute called “Accelerating the U.S. Clean Energy Transformation.”

Sumpter, looking over crates of discarded hybrid battery packs that will be shipped to Utah before getting on another truck to a grinder, is just happy others are noticing.

He testified against the Colorado air quality commission’s decision in 2019 to adopt California’s standard that dealer EV sales must rise each year. As one of a tiny handful of car shop owners fixing solely EVs and hybrids, Sumpter felt the “hockey stick” shaped chart predicted for EV sales would leave too many discarded batteries leaking in dumps or catching fire in abandoned sheds, giving the EV revolution a bad name.

Now, though, Sumpter sees that EV adoption by the public is happening more slowly than the wildest marketing projections. And while MileHybrid is still at the center of it all, he sees a network of battery reuse and recycling entrepreneurs starting to coalesce. 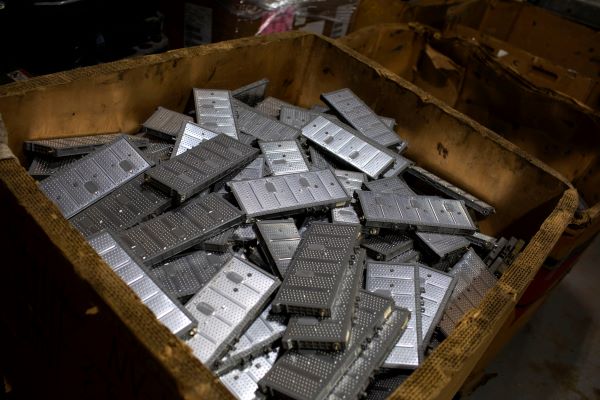 [EV batteries piled in a box for recycling on Wednesday, May 19, 2021, at Mile Hybrid Automotive in Denver, CO. (Hugh Carey, The Colorado Sun)]

“Five years ago, or even three years ago, I expected this problem to be much worse. And it looks to me like there is capacity coming along,” he said, maneuvering through a new shipment of used batteries with some potential left, at his shop near Smith Road and Dahlia Street.

Coloradans who care about recycling, though, need some reassurance.

Golden data analyst and EV owner Andy Pickering drives both a Prius hybrid and a Fiat EV. And he has some questions: “Do the state’s plans to increase EV use include any regulations or incentives regarding battery recycling or reuse? Are they depending on the federal government or auto companies to do something? What would happen right now if my EV battery died?”

The Colorado State University researchers spent the late fall and early winter trying to answer those questions, while Gov. Jared Polis was putting the finishing touches on his administration’s Greenhouse Gas Emissions Reduction Roadmap. One of the CSU methods was calling every auto-related outfit they could think of.

The responses CSU got were textbook lessons in early-adopter frustrations — they often depended on which clerk answered the phone at which chain auto parts shop: “The Lafayette store said they will not take Li-ion vehicle batteries. Recommended calling the dealer.”

So for now, the battery-recycling solutions come pretty much exclusively from Sumpter’s shop.

The first question to answer with an old electric car battery is, can it still power a car?

Early models of the Nissan Leaf, Sumpter said, disappointed many owners by promising a 100-mile charge range, only to fade quickly to 60 miles, then 50, and worse. (Current fully-electric sedans often charge up to a 300-mile range in warm weather.)

While batteries have improved, Sumpter said, they are limited, just like a smartphone or camera battery, where every recharge nibbles at the lifespan. An EV owner who bought a recent model can expect to be looking for a battery replacement in eight to 10 years, Sumpter said.

The transmissions and other systems on older EVs are proving surprisingly resilient, lasting up to 500,000 miles in some cases, Sumpter said. Battery packs appear to fade significantly after about 150,000 miles. 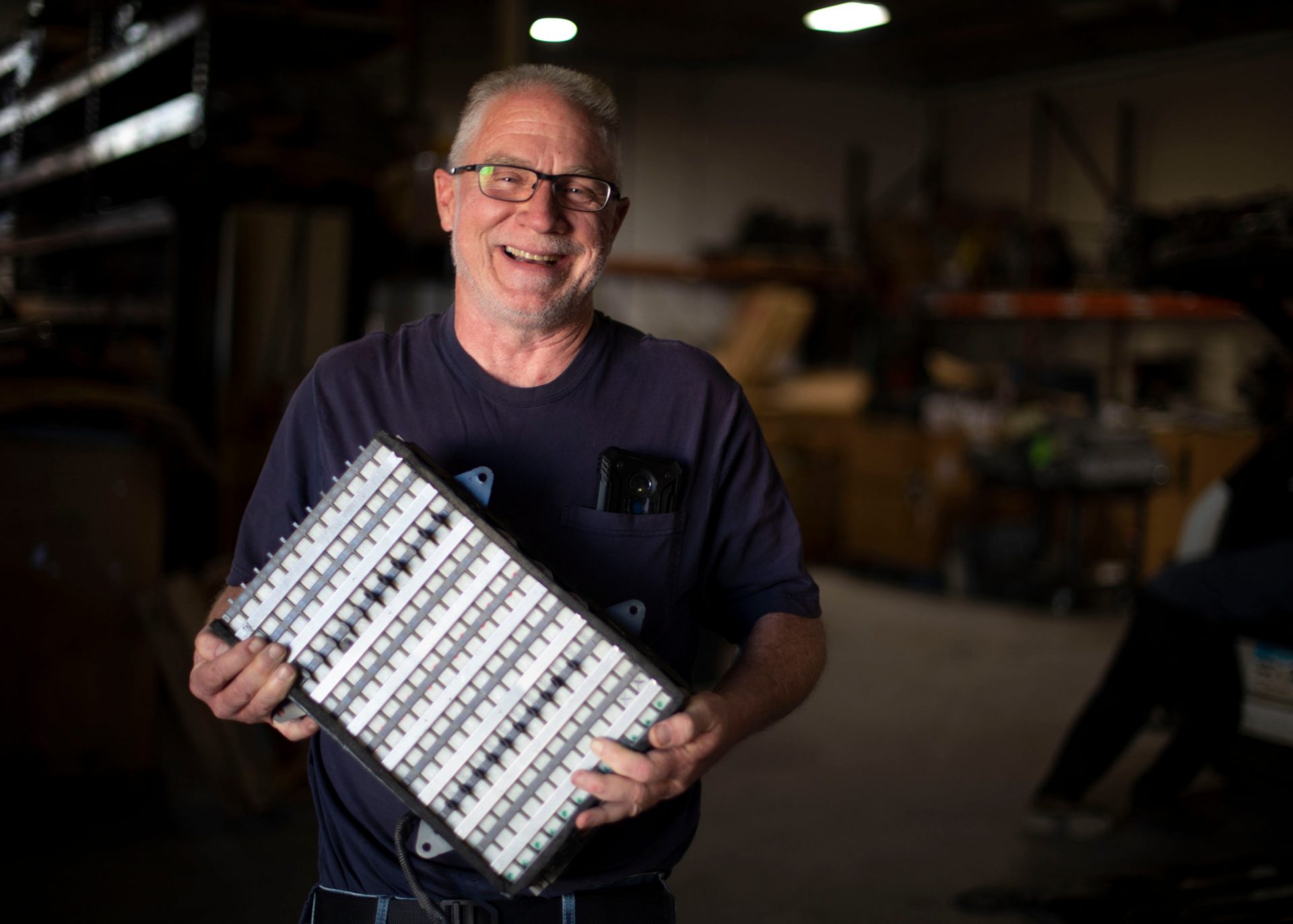 [Eric Sumpter holds a pack of 12 EV batteries, weighing approximately 40 pounds, before it is dissembled for recycling on Wednesday, May 19, 2021, at Mile Hybrid Automotive in Denver, CO. (Hugh Carey, The Colorado Sun)]

EV battery packs are bundles of rectangular cells the size of an iPad. Often, a used battery pack that Sumpter takes in bulk from scrappers or accepts as recycling will have some dead cells on the ends, but good ones remaining in the middle. Cells on the ends get hotter while driving, and therefore degrade faster, than those packed in the interior.

MileHybrid employees like Tim Arellano disassemble the battery packs, test for good cells, and reassemble them into an almost-as-good pack that can go back into a car. Sumpter can replace an EV battery array with a refurbished set for about $1,300, while going to a dealer for a battery reboot might cost $3,000.

Next stop for the individual battery cells that lack the juice for car acceleration might be a solar nerd’s garage-tinkering project.

Part-time or self-taught home engineers periodically come to Sumpter looking for battery packs they can use as electricity storage on home solar arrays, or for a remote off-the-grid cabin. A battery cell that can no longer meet a driver’s on-ramp speed needs may still be good enough for the slow-in, slow-out energy trickle in a home solar system.

A few people also come by looking to soup up a golf cart.

Perfectly good batteries also come in from auto scrap yards after hybrids or EVs have been in accidents. Some of the battery packs are intact and transferable, others have dinged cells and need to be taken apart and tested.

The next set of battery bins in Sumpter’s shop is for the seriously spent or the hopelessly dented. This is where the promising future of the EV world meets the reality of disintegration. Battery packs have elements hugely valuable in pure form and terribly destructive when carried by runoff into an urban stream: nickel, cobalt, lithium, lead, acid, cadmium, among others.

Sumpter compares separating the good stuff from the worthless or toxic stuff to Boy Scouts collecting cans for cash. The “good” ones — aluminum soda or beer cans — produce cash returns, while the “bad” ones — steel food cans — get tossed again.

Only it’s not nearly as easy as creating two piles of cans. EV and hybrid cells can be melted down in furnaces or ground into powders. The resulting potentially-valuable mix is referred to in the industry as “black mass.”

But further separating the components profitably remains a challenge. Investors around the country raise a lot of venture money promising massive battery recycling centers. Call him when they actually get built, Sumpter says.

“There’s a modicum of money to be had selling these,” he said, waving a hand over the bins full of scattered cells. “Not much, frankly. It’s certainly not a business unto itself. However, there’s enough to provide an incentive to do it correctly.”

There’s no perfect solution to any environmental problem, he notes. Creating the batteries in the first place is a very dirty and increasingly controversial process — a key element, cobalt, comes from a few places in Africa, where both land and labor get exploited. 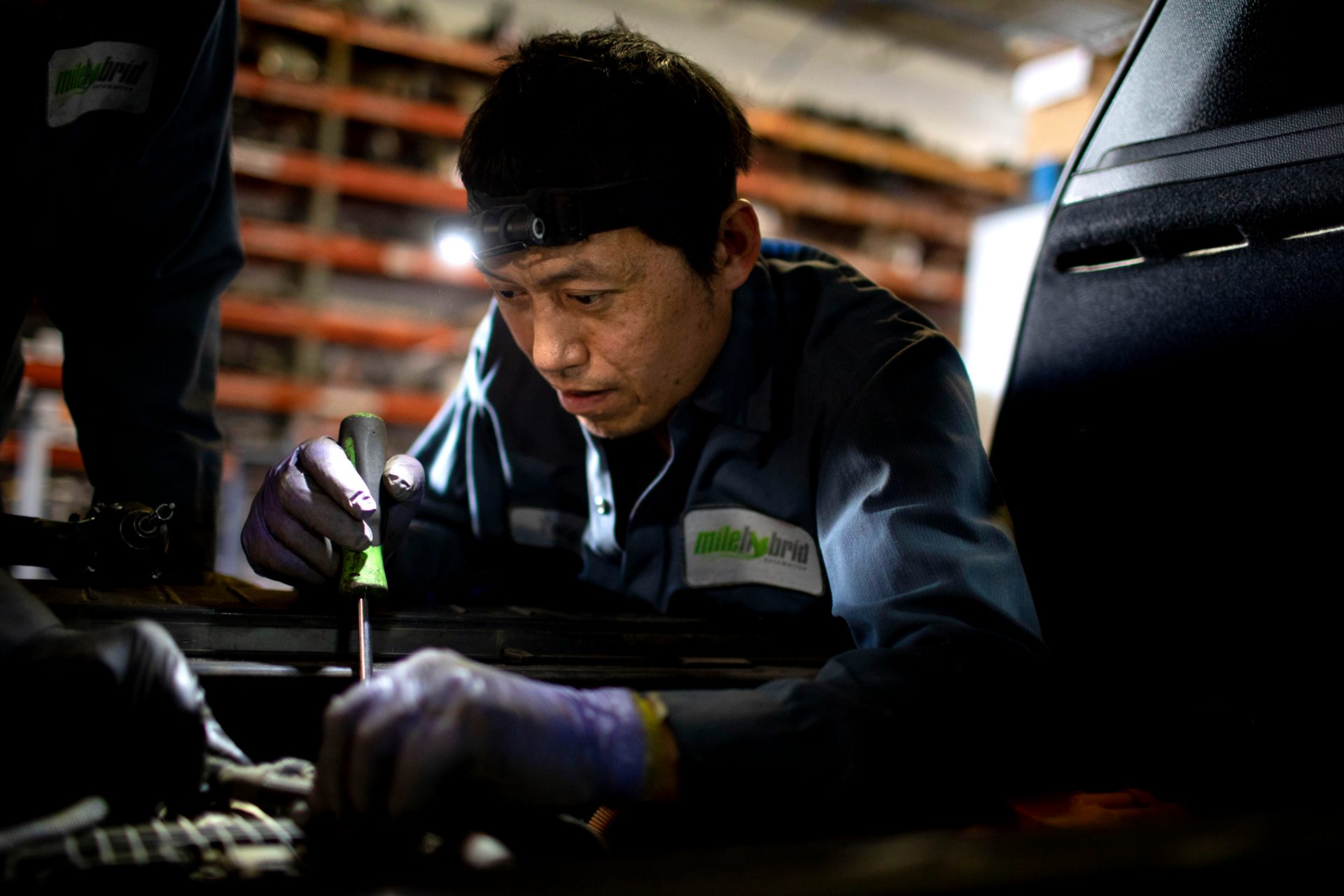 “We would love for everything we use in our society to be completely recycled and repurposed and have zero waste everywhere we go,” Sumpter said. But “it’s not zero impact on the environment every step of that way. There’s energy and carbon footprint and everything else that goes along with it.”

Utah is home to Natural Ventures, a Salt Lake City-based metals aggregator. Brylan Schultz’s job for Natural Ventures is to send trucks around to dozens of blue collar shops like Sumpter’s and put enough precious metals in one load to be worth the shipping costs.

Consumers and governments may be right to worry about the pace of recycling, Schultz said, but the EV re-use business is ramping up at about the rate of supply.

Lead-acid batteries, of the kind used in every car for a century to juice the starter, are easy by comparison. Ninety percent of the materials in a lead-acid battery go into new lead-acid batteries, saving more of the world from the kind of destructive digging now going on in the Southern Hemisphere for lithium and cobalt, he said. Natural Ventures wants to be a part of getting to the same level of reuse for EVs.

Spent hybrid and EV battery cells from around the Southwest are sorted and packed into semi-trailers for shipping from Salt Lake to a recycling specialist in New York state, Schultz said. Li-Cycle Corp. is expanding facilities to handle the pending influx of lithium-ion EV cells. The few recyclers like Li-Cycle who create “black mass” want a steady flow from scrapped EVs.

“What they need is like three semis a day,” Schultz said. His trucks stopping in at MileHybrid on a collection route are a small but useful part of that, he said.

“Right now, the faucet is just barely even dripping,” he said. “We’re kind of laying the groundwork for when the faucet really does come on, because there’s a tidal wave of these things coming.”

May 18, 2021 Original article published in the Toronto Star When we envision a green future, we imagine a clean, frictionless world. Emails leave no paper waste. Electric vehicles emit...

Old electric cars are a raw material of the future

Old electric cars are a raw material of the future

May 15, 2021 Original article published in The Economist Car sales have, generally speaking, plunged during the coronavirus epidemic. But there has been one bright spot. Electric vehicles (evs) continue...