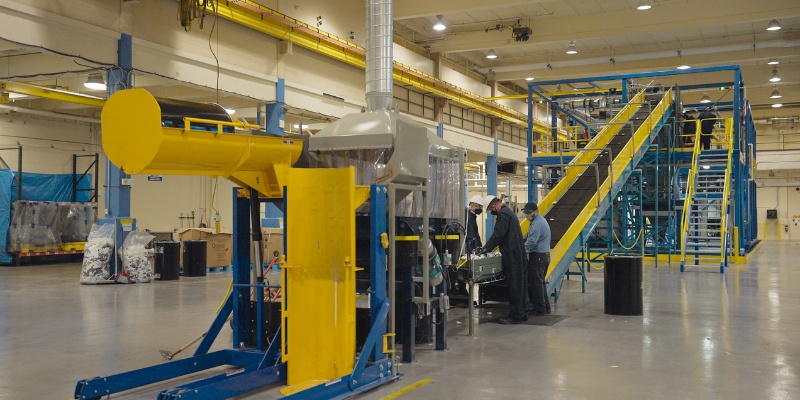 A Canadian company that recycles lithium-ion batteries – which power consumer electronics such as cell phones, laptops and electric vehicles – is looking to have its processing facility at Gilbert Gateway Commerce Park operational in January.

Li-Cycle expected to submit its application for a conditional use permit soon after holding a neighborhood meeting on Aug. 12 that was attended by two people from the community.

“They are really the good guys,” raved attorney Rod Jarvis, who represented Li-Cycle in the virtual meeting. “It’s the greenest of the green operations.”

The proposed facility would be housed in one of three buildings built on spec on a 28-acre site zoned for light industrial near Power Road and Loop 202. The size of Building 2 is 138,970 square feet and includes 36 truck wells and six loading doors.

Li-Cycle first announced in April that it was looking at Gilbert for its third commercial lithium-ion battery recycling facility. Its two other locations are in Rochester, New York, and Kingston, Ontario.

The $10-million Gilbert project would create 40-plus jobs ranging from operations to management staff, according to Andrew Wong with Li-Cycle. He added that the company has a minimum 10-year commitment to stay in town.

Dubbed “Spoke 3,” the facility could process up to 10,000 metric tons of spent batteries and battery manufacturing scrap per year, doubling Li-Cycle’s current capacity, according to the company. The Gilbert facility also is expected to be engineered to directly process full-electric vehicle packs without any dismantling.

The discarded batteries and scrap are shredded into what’s known as black mass, a powder substance that contains a variety of metals, including lithium, cobalt and nickel.

The black mass then goes to Li-Cycle’s North American Hub, under development in New York, for further processing into materials used to make new batteries.

According to the company, 50 percent of  battery waste today comes from consumer electronics, followed by manufacturing scrap at 29 percent, auto original equipment manufacturer at 16 percent and energy storage systems, 5 percent.

By 2025, manufacturing scrap is anticipated to make up 68 percent of the source for battery waste, followed by auto OEMs, 25 percent; consumer electronics, 5 percent and energy storage systems, 2 percent.

The need to recycle Li-ion batteries has increased especially with more electric vehicles coming on the roads, according to Li-Cycle. President Joe Biden in early August announced a national target for electric vehicles to make up half of all new vehicle sales by 2030.

According to the company, electric vehicle batteries can either be reused or dismantled, and the lithium-ion in them repurposed for things like solar-electricity generating batteries.

Li-Cycle claimed it has reinvented the recycling process by developing and validating a patented technology that enables recovery of at least 95 percent of all materials found in Li-ion batteries through a zero-waste process, allowing it to fill a growing supply-chain need.

The industry norm is less than 50-percent recovery, according Li-Cycle.

Resident Allen Quist noted the site’s proximity to homes to the west and in-coming houses northwest of the site and wanted to know the quantity of chemicals to be stored at the facility and if there would be any emissions and odors from the processing.

“We just only use two chemicals on site, acids and bases to balance our systems,” Wong said. “They are not in the main process of breaking down the batteries.”

He added that just one pallet worth of the chemicals, which are commonly found in consumer products like detergents and fertilizers, would be on site at any given time to minimize environmental effects if anything were to occur.

Li-Cycle is unlike other recyclers that use lots of heat and wasted energy but because it’s proprietary, not much can be disclosed about the company’s processing, Jarvis said.

Wong said the facility’s air emissions are so minimal that they fall under a non-Title V permit in Maricopa County – overall less than 2 tons of emission on an annual basis.

Quist asked if the town permit would cap the amount of emission or would it be on an honor system.

Planner Josh Rogers, assigned to the case, said staff didn’t know all the specifics yet or has done a full review to fully weigh in on that question.

Wong added that the facility won’t produce odors because it won’t be discharging industrial wastewater, which is typically associated with smells. He pointed out that the company’s other two locations have had no community complaints about their operations. Both sites began operation in 2020.

Wong said the Rochester site is in a business park and fairly close to a residential neighborhood similar to what’s proposed in Gilbert.

“To date we’ve not had any major or minor complaints,” Wong said.

He also addressed possible concerns such as traffic, noting that unlike the other tenants at the industrial park, Li-Cycle anticipated just four to five trucks a day from 8 a.m.-6 p.m.

And, Wong said that the machinery used on site “doesn’t produce too much mechanical sound.”  He showed two short video clips – one shot in front of the Rochester building and one inside it in an office space where there were “no discernable loud noise”

Jarvis said as the project makes it way through the town review process, there will be future hearings for public comment.

Li-Cycle said it chose Gilbert because it is strategically located for the western-U.S. battery recycling hub, as well as being at the nexus of where there will be continued growth in the quantity of lithium-ion batteries available for recycling.

Li-Cycle was founded in 2016 and has over a dozen spokes located in Europe, China and Asia-Pacific countries. It touts it is currently the largest recycler of lithium-ion batteries in North America.

By 2025, the Toronto-based company anticipated a total of 20 operating spokes in North America, processing 100,000 metric tons a year and four total operating hubs.

According to Li-Cycle, its end products are “future proofed – providing the building blocks of batteries that are not at risk of¢ technological obsolescence.”

And, reusing and recycling Li-ion batteries helps conserve natural resources by reducing the need for virgin materials and reducing the energy and pollution associated with making new products, according to the U.S. Environmental Protection Agency.

September 13, 2021 Original article published in Energy Storage News Lithium battery recycling company Li-Cycle is planning its fourth facility in North America, the company said, as it made its...

Alabama Will Get A Li-Cycle Battery Recycling Facility

Alabama Will Get A Li-Cycle Battery Recycling Facility