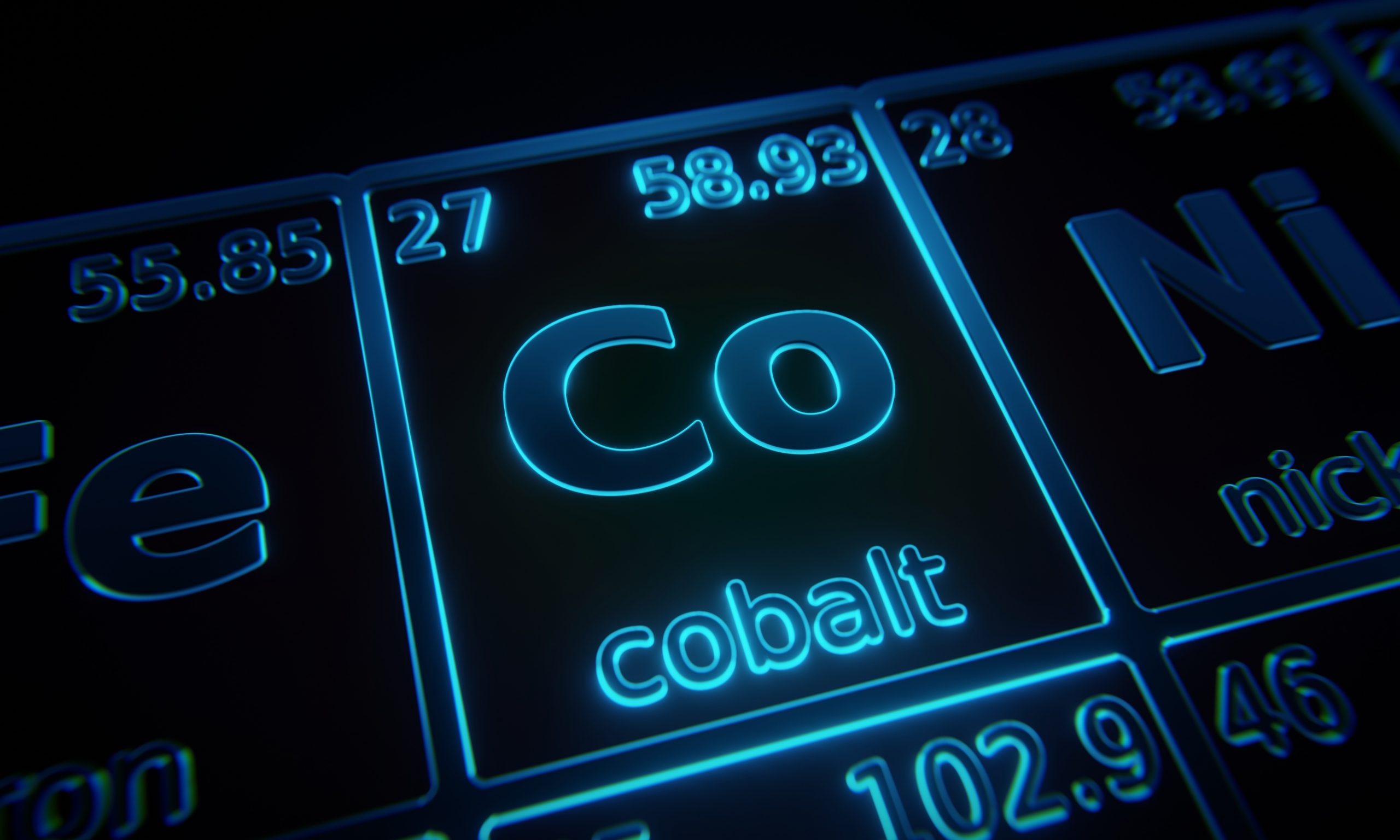 The Periodic Table is packed with elements of critical importance to U.S. economic and national security. From lithium to iron to uranium, the nation needs a steady diet of minerals and metals, and few are as challenging to source as number 27: cobalt.

The bluish-gray metal’s widest use today is in the cathodes of lithium-ion batteries, which proliferate in commercial and military devices.

Cobalt also serves the Defense Department in temperature-resistant alloys for jet engines, in magnets — used for things like stealth technology and electronic warfare — and alloys used in munitions.

And like so many materials and commodities today, China controls the bulk of the global cobalt supply.

“What makes this a really significant challenge is China could use this the same way Russia can use oil, or in the same way that the world is impacted because of grain supply,” said Brad Martin, director of RAND Corp.’s institute for supply chain security. China’s ability to deny access to cobalt “creates a national security vulnerability,” he added.

Studies by minerals analysts and the U.S. government say that 70 percent of mined cobalt comes from the Democratic Republic of Congo, a politically unstable country with a well-documented history of poor labor and environmental practices in its mining sector. Almost all the cobalt mined there — usually as a byproduct of nickel or copper mining — heads to China for refining and processing. Currently, China processes about 80 percent of the world’s cobalt.

“The big issue is China and its influence over the DRC, and the fact that China understands better than the United States the need to have access to strategic materials,” said Martin. “China has not only been finding sources, it’s also been stockpiling, and that is just not something the United States has successfully done.”

On the contrary, the United States has sold off large amounts of its critical materials stockpile like cobalt over the last few decades.
According to “Revitalizing the National Defense Stockpile for an Era of Great-Power Competition,” a Heritage Foundation report released in January, the supply contained $22 billion worth — in today’s dollars — of critical materials in 1989. It’s now down to $888 million.

Still, the stockpile isn’t designed to be a solution. Rather, it’s a stopgap in case there is a conflict with China or some other shock that interrupts the supply chain.

However, Martin pointed out that China doesn’t need to resort to military means to get what it wants because of its control over cobalt and other critical materials.

“If China is in a position of being able to demand political concessions, diplomatic concessions because it has a hammerlock over some set of commodities, it doesn’t need to go to war,” he said. “It already has all the instruments of influence it needs to prevail.”

In the short run, the supply chain risk isn’t that significant unless there is a situation where China is incentivized to cut off cobalt supplies, he added. Plus, China would lose revenue if it stopped the cobalt supply.

“The main mitigation is just the overall state of relations is such that nobody really benefits from cutting off supplies within the supply chain, because the supply chains are so interdependent,” he said.

However, that’s not a durable solution. Hence, during the last five years, successive administrations have made supply chain resilience for critical materials a priority through executive orders and policy guidance.

Technically, the Defense Department does not rely on Chinese cobalt. “For many years, the ‘specialty metals clause’ (10 USC 4863) has required defense contractors and their suppliers to purchase cobalt-base alloys and steel products — with greater than 0.25 percent cobalt — that is melted or produced in the United States or other close U.S. allies,” Pentagon spokesperson Jessica Maxwell said by email.

“This provides some protection for the defense industrial base for defense-unique items, but this clause does not apply to commercial products or electronics, among other exceptions,” she added.

And with the Defense Department looking to transition vehicles and bases to renewable sources, that means growing demand for large batteries, which do rely on Chinese cobalt.

In March, the Biden administration invoked the Defense Production Act to address the problem of sourcing cobalt and other critical materials.

According to the memorandum: “The United States depends on unreliable foreign sources for many of the strategic and critical materials necessary for the clean energy transition — such as lithium, nickel, cobalt, graphite and manganese for large-capacity batteries. Demand for such materials is projected to increase exponentially as the world transitions to a clean energy economy.”

The United States shall secure materials such as cobalt “through environmentally responsible domestic mining and processing; recycling and reuse; and recovery from unconventional and secondary sources, such as mine waste,” the memorandum states.

Domestic mining will be a challenge, according to experts and the U.S. Geological Survey. Its analysis finds that more than 120 million tons of cobalt have been identified on the planet. Of that, 1 million tons reside in U.S. territory. However, the latest USGS cobalt report estimates that only 69,000 tons can be “economically extracted or produced,” compared to 3.5 million tons in the Democratic Republic of Congo.

Companies such as Jervois, Glencore, Electra and U.S. Strategic Metals have mining projects in various stages of development in the United States, with Idaho being an area of major focus. The U.S. government is working to streamline the permitting process for new mining activity.

But experts are skeptical that mining will solve much of the cobalt supply chain conundrum.

“There are some real challenges with trying to bring mining back into the United States in a big way,” said Martin. “And for the damage it causes, it’s not necessarily clear it’s going to yield all that much.”

Caspar Rawles, chief data officer with Benchmark Mineral Intelligence, agreed that mining within the United States is a low-yield proposition. Canada and Australia are better prospects, although right now Indonesia looks to be the next big source of cobalt, he added.

“That could stack up to be quite considerable volume — let’s say the next 5 to 10 years,” he said. “But the challenge … through the lens of national security is that the vast majority of investment that’s going into Indonesia is coming from Chinese companies.”

However, the United States could compete for Indonesian — or any other country’s — cobalt by attracting “midstream” businesses, said Rawles. “So, by that I mean like refiners and cathode producers, because those are commercial entities that will go out into the market, and they will secure raw materials via commercial contracts.”

In other words, they will cut the Chinese refiners and producers out of the loop.

“It’s not like direct control of the raw material,” he added. “But you’re getting access via proxy, because if you have a refining company in your country … that company is going to be looking to sell its products domestically and will have feedstocks and inventories of that material in place.”

The Canadian company Electra is constructing a refinery that is scheduled to open later in 2022. Next year, they will begin refining 5,000 tons of battery-grade cobalt per year, according to the company’s website. However, that’s a small fraction of the 160,000 tons of cobalt mined annually.

Where analysts see greater potential to kick the Chinese cobalt habit is by producing the metal through the recycling of batteries and production scrap and waste.

“It could potentially be a very big source of raw material in the near term,” Rawles said. “What you’re looking at is what we call ‘production scrap’ or ‘batteries scrap.’ And so that’s just either off-spec or just off-cuts of production of battery materials that will then get fed back into the battery supply chain.”

Then, as batteries age and are no longer useful in a car or other device, the batteries can be recycled to extract the cobalt and other minerals back out to create new batteries.

It will be about 10 years before the recycling market takes off, he added. “Then, of course, you have big volumes, and you definitely want to ensure that you can retain that, regionally process it and put it back into your own … battery supply chain.”

There are several companies and projects ongoing to recycle scrap and spent batteries.

According to a company spokesperson, those facilities are currently processing 20,000 tons of lithium-ion battery material per year.

The company is constructing new facilities in Alabama, Ohio, Germany and Norway that will increase production to 65,000 tons by the end of 2023, the spokesperson added.

Redwood expects to produce anode and cathode components by 2025 to power more than 1 million electric vehicles and to expand to 5 million vehicles by 2030, a company statement said.

Both the House and Senate versions of the 2023 National Defense Authorization Act include provisions requiring the Defense Department to recycle spent batteries.

Government funding will be essential in scaling up recycling in the United States, said RAND’s Martin. Establishing collection and transportation networks to get materials to recyclers could be cost-prohibitive for the private sector, he said. That’s one of the reasons he argues for a more collaborative relationship between industry and government to identify potential supply chain vulnerabilities early on.

“As companies design products and … supply chains are erected, everybody needs to be much more aware of where things come from and account for these types of things up front and not just stroll into a vulnerability,” he said.

“So, a medium-term impact or requirement is for the government and for industry to do a better job of working together to figure out where their vulnerabilities are going to be, and where that can be met with private action and where it’s going to require collective action, require the government to do something over and above what individual industries can do,” he added.

June 24, 2022 Original article published in EffectiveSavings.cz The current global effort to electrify transport in order to protect the climate and to solve the storage of energy from renewable...

July 20, 2022 Podcast by The Wharton Current  Last year the IEA put out a report that said that if we actually start tracking toward net zero by 2050, we...