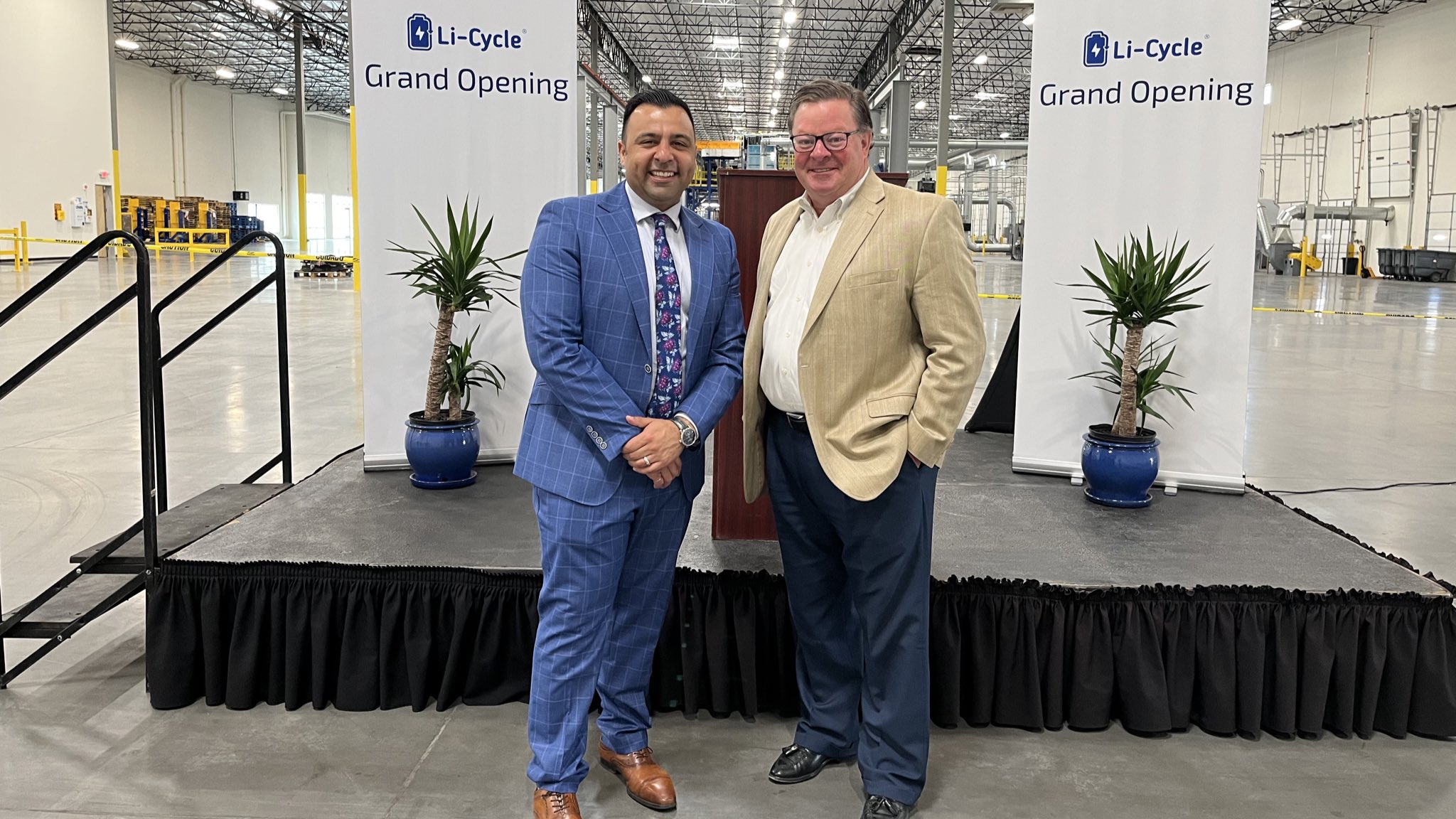 The site will be able to process up to 10,000 metric tons of manufacturing scrap and end-of-life batteries per year.

Li-Cycle Holdings Corp., with headquarters in Toronto, has begun commercial operations in Gilbert, Arizona. This site is the company’s third spoke facility, joining plants in Kingston, Ontario, and Rochester, New York. However, the Arizona site is the first to use proprietary technology that processes full electric vehicle, or EV, battery packs without dismantling them manually, making recycling of those battery packs safer, sustainable and more labor efficient, the company says.

The facility is strategically located near Li-Cycle’s existing battery and manufacturing scrap supply network in the southwestern U.S. to optimize logistics and other efficiencies for recycling services. Additionally, Arizona presents a significant opportunity for lithium-ion battery recycling in light of the emerging EV supply chain in the region, as well as its proximity to large markets such as California, which are expected to produce an increasing supply of end-of-life batteries available for recycling from EVs, energy storage projects and consumer electronics, the company says.

The primary output of the Arizona spoke is black mass, consisting of a number of critical metals, including lithium, cobalt and nickel, which Li-Cycle says it will convert into battery-grade materials at its first North American hub, which is under construction in Rochester, New York. Li-Cycle says it expects that the Hub will be able to process 35,000 metric tons of black mass annually, with commissioning targeted for 2023.

“The launch of Li-Cycle’s innovative battery recycling facility bolsters Arizona’s already robust EV supply chain and sends a signal that Arizona is the place to be for electric batteries,” says Arizona Gov. Doug Ducey. “Sustainable industries have found a home in Arizona, and few companies represent the innovation and possibilities that brings like Li-Cycle. We are proud to see Li-Cycle’s facility up and operational.”

“We are pleased to announce that our Arizona spoke is operational,” says Richard Storrie, regional president, Americas, of Li-Cycle. “This new state-of-the-art facility enhances our ability to serve the recycling needs of our customers while significantly increasing our operational recycling capacity. We’re also creating an additional domestic source of critical metals to be transformed and supply lithium-ion battery production.”

Li-Cycle held a grand opening event earlier this month at the 140,000-square-foot facility, where the company was joined by its customers, local government officials and others connected to the Gilbert community and surrounding area

Li-Cycle’s Alabama spoke, which is of the same design as the Arizona site, is scheduled to be operational in the third quarter of the company’s 2022 fiscal year. When the Arizona and Alabama spokes are operational, Li-Cycle will have a total processing capacity of 30,000 metric tons annually. By the end of 2023, the company says it expects to have a total of 65,000 metric tons of lithium-ion battery processing capacity per year across its spokes in North America and Europe.

Li-Cycle’s third operational Spoke facility in North America commences operations, with capacity to process up to 10,000 tonnes of manufacturing scrap and end-of-life batteries per year Arizona Spoke is the...

May 11, 2022 Original article published in Energy Storage News Li-Cycle’s latest high-profile investor will be natural resources giant Glencore, which has agreed to back the Canadian battery recycler to...