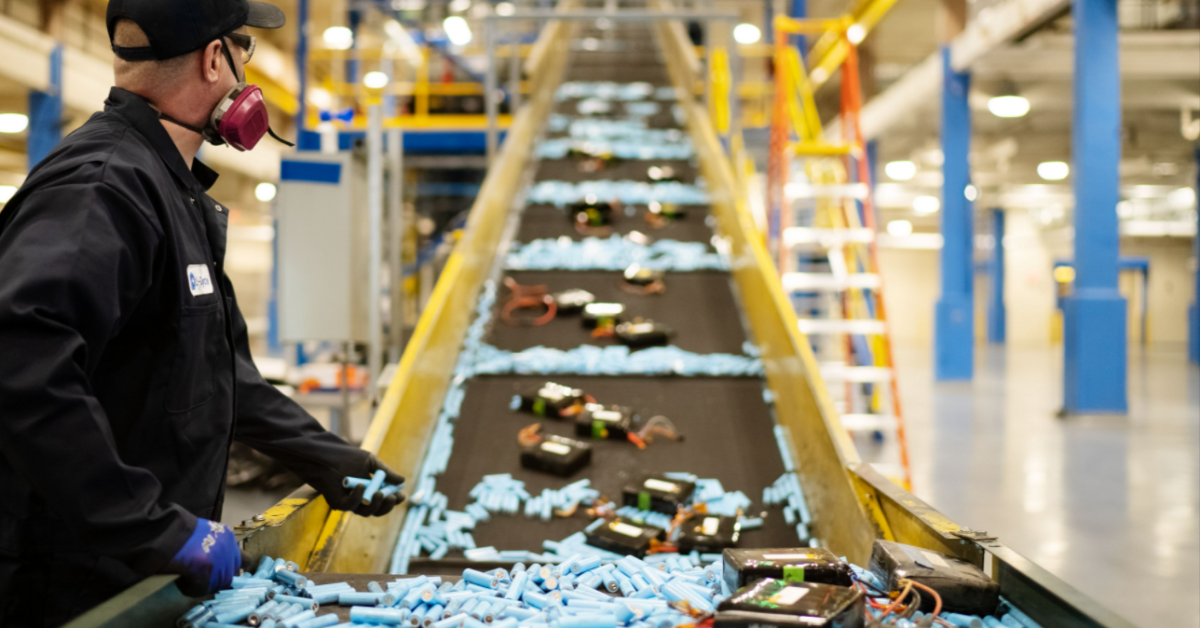 One of the most common complaints about the accelerating push for mass electrification of transport and industry is that there’s no means to handle the tremendous volume of waste batteries that will be generated. But what if there was a technology that could readily recycle all that waste without generating pollution in the process? What if someone could economically recover not only the high-value metals like nickel and cobalt, but the lower-value components too?

Li-Cycle Corp. says it’s that someone, with exactly that technology. Based in Mississauga, Ontario, Canada, the company was founded in 2016. It now has 140 employees, and total funding of $580 million, received as total proceeds from its going public via SPAC announced this past February in a business combination with Peridot Acquisition Corp. The transaction will close tomorrow, August 10th, and Li-Cycle will make its public company debut the New York Stock Exchange the following day.

Li-Cycle arose from realizations made by Ajay Kochhar (now CEO) and Tim Johnston (now Executive Chairman) when they both worked for Hatch, an advisory and industrial clean tech engineering firm, where they first recognized the opportunity in better recycling of lithium-ion batteries. “It became clear that there was a big gap in the recycling space here,” said Johnston. “That was true not only for old batteries, but for materials coming out of the battery manufacturing process as well. We built a demonstration facility in Canada, and went through multiple phases of validation, as well as an independent audit of our processes.” 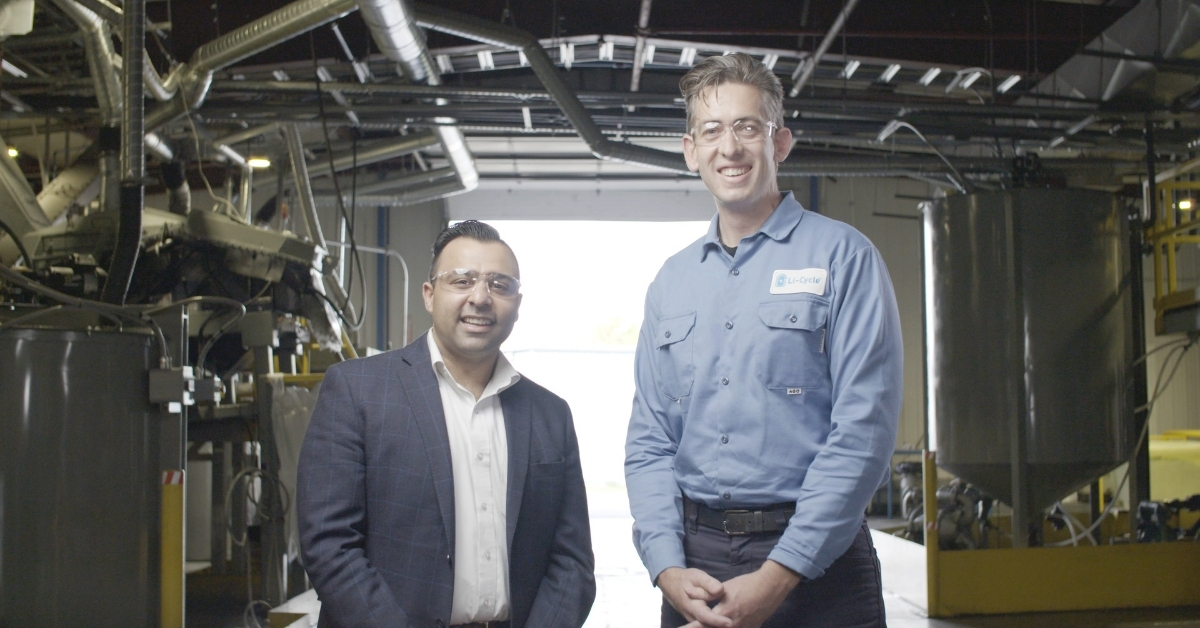 While some industry insiders have told the founders that they’re moving too early, they disagree. “The average person is already saying, ‘What happens to all the batteries? They’re hazardous and toxic–are we going to landfill them?’ Our point is that won’t happen,” added Kochhar. “That’s why we’re scaling now, because there are two phases to our growth. There’s already manufacturing scrap coming from a pipeline of over 200 battery megafactories. When we first started five years ago, there were only ten. And 5% to 10% of manufacturing output in those plants is scrap. Then there’s the end-of-life battery stream, which will start hitting in the late 2020s and 2030s. We needed time for our initial scale-up where we were iterating and refining our processes. Now we’re in execution mode.”

An early example of Li-Cycle’s execution was announced in May when Li-Cycle struck a deal with Ultium Cells LLC , a joint venture of General Motors GM+1.1% and LG Energy Solution, to recycle up to 100% of the scrap generated by battery cell manufacturing at Ultium’s Lordstown, Ohio battery cell plant.

Their approach involves innovations in both recovery technology and the business model. Li-Cycle has developed a proprietary solution-based recovery method. “There’s no waste generated, no air emissions, and zero discharge,” explained Johnston. “The solution recycles back through the process continuously. We have 20-odd patents that cover all aspects of the process along with the intermediate chemicals and the solution. The process dissolves the metals, which it then recovers, and leaves a black mass of metallic foils and low-density plastics that is further processed into useable materials. Many companies seek to thermally process the batteries, but they contain fluorinated materials, and if you burn them they create toxic materials. We didn’t feel that went with our ethos.” 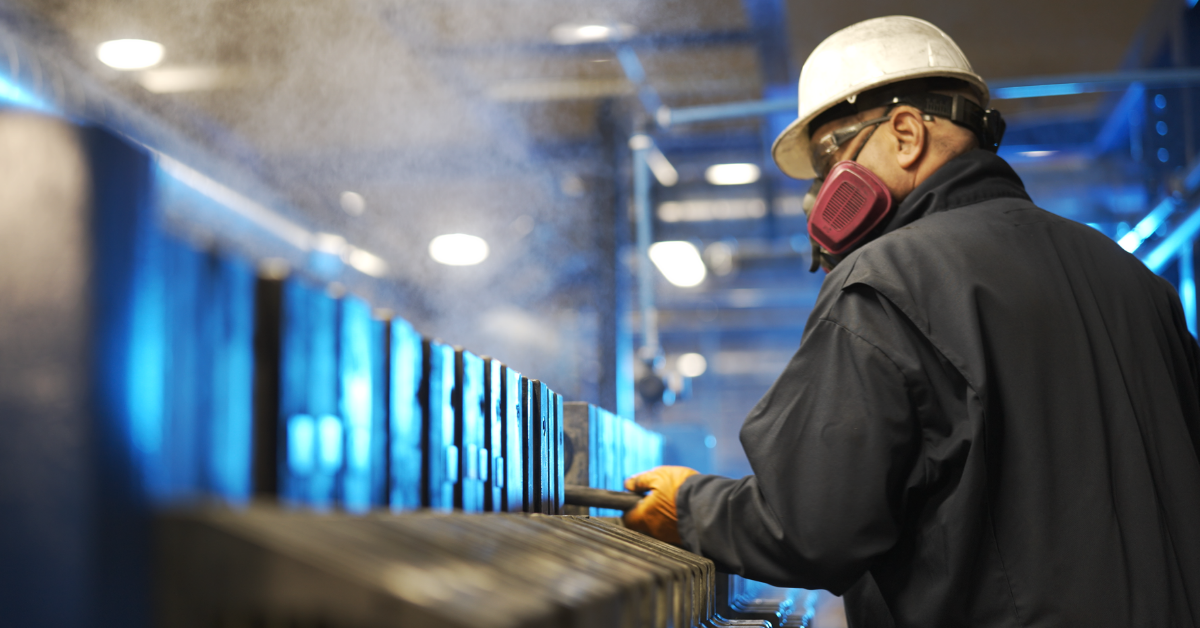 The business model innovation is the company’s Spoke-and-Hub model for material collection and processing. “The batteries are hard to transport because of electrical fire risks,” Johnston said. “And the high-value materials are 50% of the weight. So our Spokes are facilities close to the sources for the batteries and waste materials, mostly in big population centers. We’ll do the initial processing there, then transport the black mass to a central facility, the Hub.” Li-Cycle has two Spoke locations already built, in Kingston, Ontario, Canada, and Rochester, New York. They’re breaking ground on their first Hub, also in Rochester, later this year. And they have plans for well beyond that.

“We have successfully funded our base case business plan for the next five years,” Kochhar said. “We’re planning a third Spoke next in Arizona, and we’ll eventually have 20 Spokes and four Hubs. We have plans for international sites as well.”

And they believe the true opportunity goes well beyond those plans. “The recycling need here is already large and growing,” said Johnston. “Less than 1% of lithium is recycled now–most of it is lost through high-temperature processes. Recycling it is profitable. Because our process takes it back to atomic form, there’s no degradation of the material. We would argue it’s better than new. So what we already have planned is a fraction of what will be needed. It has the potential to be a significant portion of the market–70% of battery cost is in the materials. When it comes to selling these materials, we already partnered last year with Traxys, one of the largest independent global traders of nickel and cobalt. They’re also an important validation for us on our material quality.”

“Our modus operandi is that the business and the values of batteries should meet,” Kochhar added. “We’ve brought our customers along to ensure that this works as a business on its own merits. We have numerous stakeholders focused on the economics. Both our technologies and our business model are proven today.”

Some battery recycling startups claim they can recover 95 percent of the lithium, cobalt, nickel and other minerals that go into batteries, dramatically cutting down the need for new mining...