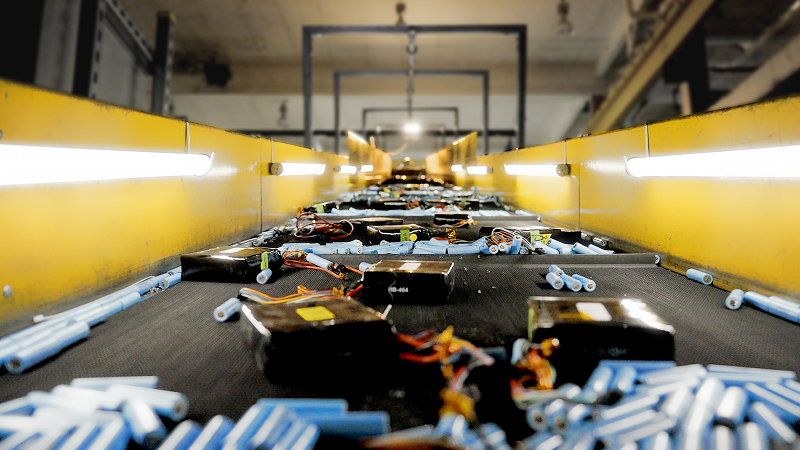 As the EV market grows, so is a new North American battery-recycling industry.

As the electrical car market expands, so is a brand new North American battery-recycling business.

Its goal: to wash up the battery enterprise and assist EVs stay as much as their promise of lowering world carbon emissions.

“There isn’t any distinction between the supplies we produce and what the mining business produces,” stated Tim Johnston, co-founder and chairman of Toronto-based Li-Cycle Holdings Corp. “It is simply actually about how a lot are you able to truly get better virtually from that battery on the finish of its life.”

EV batteries at present are fabricated from supplies from a global community of mining initiatives, processed alongside a prolonged provide chain anchored in China, Japan and South Korea. For an EV to offset the carbon emitted in mining and manufacturing its battery, it should see tens of hundreds of miles of driving, based on evaluation by researcher BloombergNEF.

Recycling the battery will assist enhance the general carbon-reduction worth of EVs.

Li-Cycle is amongst North America’s leaders in battery recycling on processing capability. It has two working processing vegetation — in Kingston, Ontario, and New York state — every able to breaking down 5,000 tons a yr of end-of-life lithium ion batteries of every kind and sizes. Its pipeline of initiatives below growth will add 45,000 tons of annual processing capability at three U.S. vegetation and one in Norway.

Johnston stated a steep ramp-up in mining over the following decade shall be crucial to getting sufficient battery supplies into circulation. However as soon as that occurs, he stated, the business should flip to recycling to function sustainably.

By 2030, Li-Cycle estimates new EV batteries will comprise between 10 and 20 p.c recycled supplies.

Ultimately, that determine may attain as excessive as 95 p.c, although that may require environment friendly recycling and much more end-of-life batteries than are at the moment obtainable.

With widespread EV adoption nonetheless years away, end-of-life battery materials is anticipated to stay in brief provide by way of the 2030s. The restricted feedstock has made location a key early consideration for recyclers.

Nevada-based Redwood Supplies, launched by Tesla Inc. co-founder J.B. Straubel in 2017, constructed its first battery-recycling facility about 30 miles from Tesla’s Gigafactory 1 in Reno, Nev. It is usually close to California, dwelling to the biggest focus of in-use EVs within the U.S.

As Redwood waits for the mandatory portions of end-of-life batteries from EVs to extend, waste from the battery-manufacturing course of and batteries from business and shopper electronics are key sources of fabric, stated Alexis Georgeson, Redwood’s vp of communications and authorities relations.

Redwood has the capability to course of about 20,000 tons of battery materials a yr throughout a number of amenities in northern Nevada. The corporate needs to triple that footprint within the close to time period.

Not like Li-Cycle, which intends to produce producers of battery cathodes and anodes with recycled supplies, Redwood plans to provide these elements internally.

“Our complete imaginative and prescient is to actually create a very round provide chain right here [in North America], localize this whole form of convoluted, 50,000-plus-mile provide chain of battery supplies,” Georgeson stated.

Localizing and integrating the totally different steps will assist drive down cathode and anode prices, which at present account for about 65 p.c of battery-cell worth tags, she stated.

Having struck partnerships with firms reminiscent of Panasonic, Envision AESC and Ford Motor Co., Redwood is now scaling up its recycling capability and mapping out plans for a cathode manufacturing plant anticipated to open in 2025.

In January, Li-Cycle detailed plans to co-locate a recycling facility with a 15,000-ton annual capability at GM’s new battery plant in Warren, Ohio, simplifying the logistics and reducing prices. Johnston stated for each ton of batteries constructed, 100 to 220 kilos of battery materials finally ends up as waste.

Different recyclers are at numerous phases of growth.

Quebec-based Lithion Recycling, as an illustration, opened an indication facility in Montreal in 2019 and is growing a commercial-scale operation.

In January, it closed the primary portion of a $125 million funding spherical, giving it the capital to construct a plant able to processing 7,500 tons of spent battery materials per yr. Lithion plans to open that facility by the tip of 2022, after which a complementary plant by 2024 that may extract the person battery metals from the waste, readying them for reuse in new batteries.

Amongst different companions, Lithion struck a cope with Hyundai Canada final March to recycle a few of the batteries from that model’s rising variety of EVs and hybrids.

Jean-Christophe Lambert, Lithion’s business-development supervisor, stated Quebec’s excessive uptake of EVs and its mining historical past make the province a super locale to scale up its know-how.

The Montreal web site may also maintain it near a supply of batteries, minimizing dangers and prices related to transporting hazardous materials, Lambert stated.

“As shut as you will be to a big quantity of batteries, the higher it’s.”

Like different recycling startups, Lithion is engaged on aggressive enlargement. It plans to make use of a licensing mannequin to staff up with firms which have current recycling networks however lack the correct know-how to course of batteries.

In January, it signed one such countrywide cope with a South Korea-based building and recycling firm, and it’s in “superior discussions” with companions in each the U.S. and Europe, Lambert stated.

Moe Kabbara, senior advisor with Dunsky Vitality Consulting in Montreal, stated the rising funding in recycling and second-life functions will assist the EV sector nail down its circular-economy credentials.

However it should take time.

“We’ll must mine the assets at present as a result of there’s a direct scarcity within the subsequent 5 to 10 years,” Kabbara stated. “And till the recycling comes on line, it is going to play a complementary function assembly the demand for the supplies.”

February 14, 2022 Original broadcast coverage from CTV Your Morning Ajay Kochhar, Li-Cycle co-founder and CEO, talks about the environmental costs of lithium-ion batteries, a key part of our fossil...

A World Without Trash: Designing the Circular Economy

A World Without Trash: Designing the Circular Economy

February 14, 2022 Original broadcast coverage from YourTV Kingston Kingston’s very own Li-Cycle is an industry leader in lithium-ion battery recycling and is helping create a circular supply chain by...